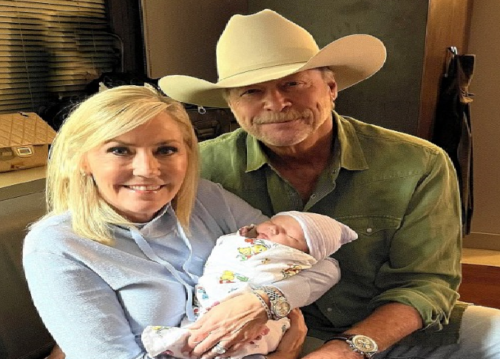 For four decades Alan Jackson has entertained his millions of fans with his wonderful mix of honky tonk and traditional country music.

He has sold more than 80 million records, is a member of the Grand Ole Oprey and became a Country Music Hall of Famer in 2017.

Despite his incredible achievements and success the modest star didn’t feel worthy to be inducted into such a star-studded hall.

Now his daughter has come out with a rare insight into the Alan Jackson she knows behind the scenes.

Country singer Alan Jackson attends his Hollywood Walk Of Fame Induction Ceremony with (L-R) daughter Mattie, daughter Dani, wife Denise and daughter Ali on April 16, 2010 in Hollywood, California. (Photo by Valerie Macon/Getty Images)
Despite his rise to stardom, the 64-year-old has always been very modest about his success preferring to focus on his music rather than the fame.

On his induction into the prestigious Country Music Hall of Fame he told Rolling Stone, “Even though I’ve done a lot, I still don’t feel quite worthy, but I feel like it’s an honor to qualify for what it requires to be in here with these great people.

Shutterstock
But one person who knows he deserves all the recognition is his 26-year daughter Alexandria Jane Jackson or Ali.

To the world, he is a country music star, but to his middle daughter, he is something different.

“I see you as: my best friend, the guy that taught me how you treat people matters more than anything else and taught me just how to stand on my own two feet,” she said.

The country music star credits his wife with getting his career off the ground after Denise told Glenn Campbell about her talented husband. Denise met the legendary American singer while working as a flight attendant.

Ali concludes her touching tribute with, “You’re every daughter’s dream father. Thank you for raising us in a house filled with Jesus and music, and always making sure we knew whatever our dream was could be our reality.”

Jackson also boasts two Grammy awards, 16 CMA awards and 17 ACM awards as well as being a member of the Georgia Music Hall of Fame and Nashville Songwriters Hall of Fame.

It’s clear from his daughter’s tribute that despite his success he has never forgotten his duty as a dad. It’s not often we hear celebrity offspring praising their parents.

Watch him in action in the video below and don’t forget to share with all the Alan Jackson fans you know.