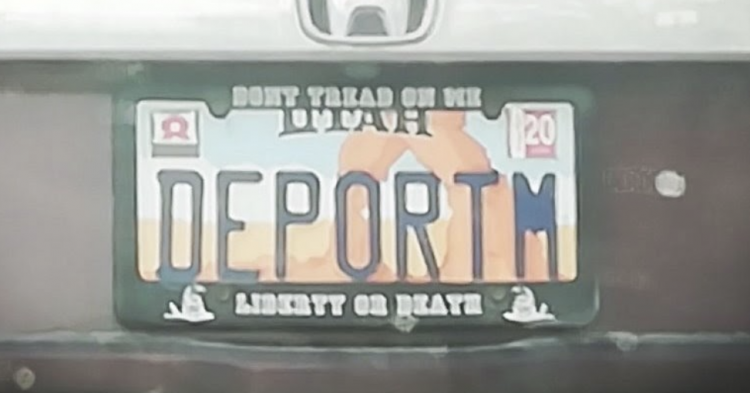 An image of a Utah vanity license plate surfaced on Twitter and has resulted in backlash for the car owner. Residents in the state are horrified that the driver was able to obtain the offensive and potentially r… vanity plate,

“DEPORTM” which a high school teacher helped shed more light upon. Matt Pacenza is a high school English teacher from Utah, found an image of the offensive plate, and tweeted a photo of it along with the words: “Hey (Utah Driver License Division), how does this plate I just saw not your guidelines?”

Many people responded to the image. Over one hundred people saw the vanity plate as a “horrific” oversight. One person wrote, “that should never have been accepted by the DMV.”

A CNN affiliate, KSL, contacted the Utah Department of Motor Vehicles. After some conversation, the reporter came into contact with the public information officer, Tammy Kikuchi, who confirmed that the plate was real and had been approved five years ago in 2015.

Offensive speech can sometimes be protected by the first amendment in the United States Constitution. Unless the speech institutes a threat or incitement to violence, it can pass such scrutiny as this one did. But when it comes to these vanity license plates, states have the power to institute some general rules to curb offensive messages from disrupting the public.

The DMV website confirmed that any letter or number combinations for vanity plates that are deemed “vulgar, derogatory, profane or obscene and express contempt, ridicule or superiority of a race, religion, deity, ethnic heritage, gender, or political affiliation” are not allowed.

Daniel Thatcher, a Republican state senator, noticed the English teacher’s tweet and agreed that it was blatantly offensive. Thatcher had reached out to the DMV as well but did not receive a reply as fast as the connected CNN affiliate did.

However, Thatcher followed up his tweet with another the next day. He confirmed that the state Tax Commission had become aware of the plate and that an investigation into the person behind its creation and approvers had been launched.

The Republicans said that the offender was using “State resources to promote divisiveness and .”

Similarly, for State Senator Luz Escamilla, the license plate was of great concern. She was very upset that someone was driving around the state with the offensive message on their car and so scheduled the topic for review this past Wednesday at the Utah Legislature’s administrative rules review committee meeting, according to reports.

Representatives from both the Tax Commission and the DMV were prepared to attend the meeting to make it clear that they do not approve of this usage of the plate. As part of the meeting, the committee will learn how Utah goes about deciding what is or is not offensive and who pushed through this controversial vanity plate back in 2015.

KUTV asked the DMV for a list of rejected vanity plate names and received more than one hundred, including, but not limited to, “SAUSAGE,” “NSTYHOE,” “W1NGMAN,” and “PLAN B.”