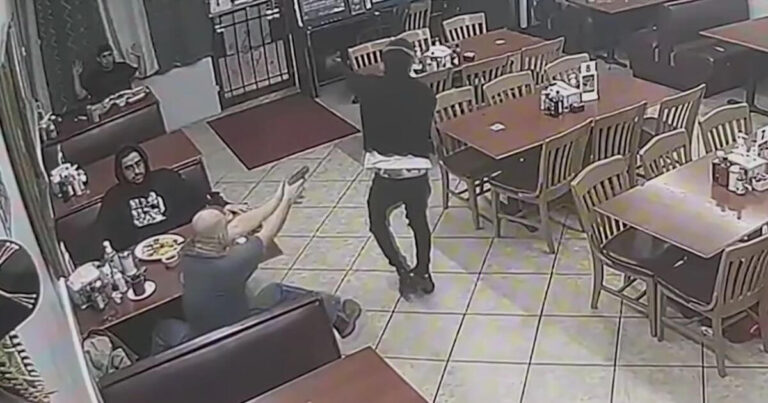 Dumb: Bringing a knife to a gunfight.

Dumber: Bring a toy to a gunfight.

Dumberer: Using a toy to provoke a gunfight.

Yet that’s what happened just before 11:30 Thursday night at a Rachito Taqueria restaurant in Houston. Surveillance video from inside the restaurant showed a masked robber brandishing what appeared to be a firearm and taking wallets, cellphones and cash from customers.

One of those customers, however, was armed, and as the robber turned from him, he drew and fired his weapon “multiple times” as the masked man appeared to be about to leave the store. (KHOU, which obtained the video from the restaurant, froze it just before the actual shots were fired.)

WARNING: Some viewers may find the content of this video disturbing.

Houston police confirmed in a tweet that the robbery suspect had been fatally shot.

No one else in the restaurant was hurt, according to police, and the robber turned out not have been armed after all.

“The robbery suspect, he came into the store, he was wearing a mask, gloves,” according to a police spokesman KHOU identified only as Lt. Wilkens. “He had a plastic pistol, either an airsoft or possibly a little BB pistol.”

KTRK-TV said police knew the identity of neither the masked robber nor the man who shot him, and that the video showed the customers fleeing the scene after the shooting. They asked that the witnesses return so that they could be interviewed.

Friday morning, Houston police released photographs of the shooter and his vehicle along with a request for the public’s assistance in identifying and locating him, saying that the shooter had retrieved the stolen money from the robber and returned it to his victims before fleeing the scene.

UPDATE: Surveillance photos of the male (and his vehicle) wanted for questioning in this fatal shooting of a robbery suspect last night (Jan. 5).

It was unknown whether the citizen who shot the robber was carrying a firearm legally or whether he would face criminal charges in the incident, although none had yet been filed.

Restaurant employees, who reporters described as still shaken by the event, told KHOU that the restaurant would re-open for business around 7:00 this morning.

The entirety of the HPD’s statement follows:

Houston police are asking for the public’s assistance in identifying a male wanted for questioning in the fatal shooting of a robbery suspect at 6873 South Gessner Road about 11:30 p.m. on Thursday (Jan. 5).

Surveillance photos of the male and his vehicle, a 1970s or ’80s model pickup truck with no bed, are attached to this news release. Investigators want to speak with the man for his role in the shooting. No charges have been filed.

The identity of the deceased male suspect, believed to be in his 20s, is pending verification by the Harris County Institute of Forensic Sciences.

Officers were dispatched to a shooting call at the restaurant at the above address and observed an unknown black male in all black clothing, a black ski mask, and black gloves had been shot multiple times inside the business. Paramedics pronounced him deceased.

Witnesses told officers the suspect entered the restaurant and pointed a pistol at patrons as he demanded their money. As the suspect collected money from patrons, one of the patrons, described as a white or Hispanic male, produced a gun of his own and shot the suspect multiple times. The shooter collected the stolen money from the suspect and returned the money to other patrons. He and other patrons (victims) then fled the scene.

Investigators are asking the shooter and the victims who left the scene to contact the HPD Homicide Division at 713-308-3600 to provide statements regarding the incident.